You are here: Home / India / Circle of Impact 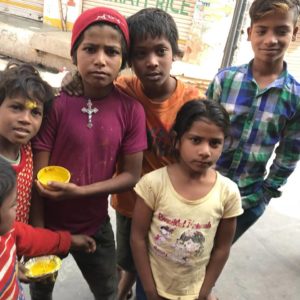 On my recent trip to India, I learned more from these eyes than anything else I experienced. These eyes found their way straight into my heart.

We met these children on the streets of a village called Mathura. It’s a very important city to Hindus, the birthplace of Lord Shiva. While we were there, we observed hundreds of devoted Hindus in pilgrimage, either walking barefoot or literally crawling on their bellies the 22 kilometers around “Holy Hill”. Amidst these pilgrims, were hundreds of hungry children.

The first response of a westerner is to give them a few rupees. And then more come…they swarm. There are so many, it is not possible to give them all money. It starts to feel crowded, maybe even unsafe. So the nice westerners start to ignore. To push past. To swat away even. It’s hard to explain, but I watched as people with white skin, people with more value in the clothes they were wearing than these children will probably know in their lives, swatted these little ones away like flies. I was on the verge of tears. What is the answer? What can we do? What can I do?

The Circle of Control 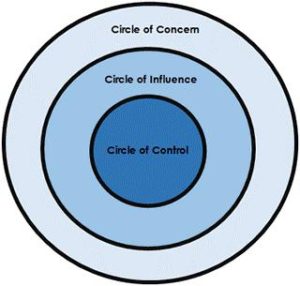 I remembered a concept taught by Stephen Covey.  Imagine a bullseye. In the middle, is the circle of control. Things you can control. I prefer the word impact. This center is very small, as there really is very little we do control, or have impact over in life. In any moment, what is the impact I can make? Outside this circle is the circle of influence. Things you might be able to influence, or make a slight difference with. Maybe through writing this post, I can influence someone with my words. Maybe. Outside that circle is the circle of concern. Things I am concerned about, but probably don’t make much of a difference with. I watch the news. I get a stomach ache, I shake my head, I complain, but nothing is really impacted or changed by me having this experience.

So this bullseye flashed through my mind, and I wondered what possible impact I could have here. With these kids, the ones looking up at me right now. I was blessed to be traveling with a brilliant woman named Rebecca. She pulled some orange gum out of her purse and started handing it out. Their smiles lit up the dirty street. 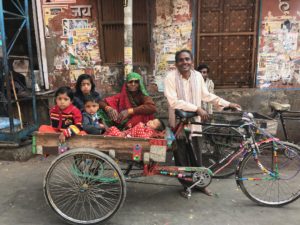 We stepped onto a side street, where it was less crazy and the kids followed us. They were carrying yellow paint and stamps, and we asked them to stamp our foreheads, for which we tipped them. Rebecca arm wrestled with the boys. One of them showed us a trick he did with rolling his belly. We laughed with them. We took photos, we looked into their eyes, and we SAW them. In those moments, I felt like I was making a connection…having an impact.

So what possible influence can I have here? How can I, a privileged white middle class woman from Salt Lake City, white-bread Utah have on this environment? Maybe these words will influence you, the reader, to SEE someone today. Maybe you will be inspired to pause and BE WITH another human being. Maybe you will leave someone feeling they have been SEEN as a result of reading this. And maybe that is enough…for now.

The circle of concern keeps me (and most of us) up at night. There are so many things to be concerned about, and so very little we can do about them. But all change begins with awareness. So let me share some things I have learned about India, in an effort to raise awareness…and concern. India is home to 1.3 Billion people. 17 million of them live in the large city of Delhi, where just outside a gated wealthy community, there are areas with no roads, no sewage, no water supply and the people are struggling. In India, 42% of children are underweight. India has one of the poorest health records in the world with the highest TB prevalence, three out of four children have anemia.

And yet…I experienced people in India to be truly happy. Truly. Happy. The drivers, amidst the most insane, indescribable traffic were calm. No fist shaking. No red faced, upset angry drivers. Not one. They were just driving, and paying attention. In the moment. Not getting ahead, not looking back. Just here and now, in this traffic.

If we want to make a difference, we can write a check. We can buy the things made in India. We can travel there and spend our American dollars. We can volunteer. But I believe the greatest thing we can do is right here in front of us…we can learn to SEE each other. To BE WITH the ones we are with right now. And especially for those of us who practice yoga, we can start by not just saying NAMASTE, we can actually live it.