You are here: Home / Inspiration / LOVE Came to SLC! 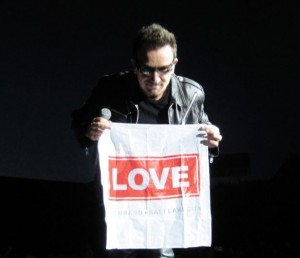 Anyone who knows me, even a little, knows that I’m kind of a U2 fan.  That’s a lie. I LOVE these guys.  Sowhen I say that I not only got to meet Bono in person, that I got to hug Bono, and that he actually kissed me on the cheek…you know that I’m restraining myself from overdoing it on the exclamation points.

When I heard the announcement that U2 was coming to my home town ON MY BIRTHDAY!! I knew something special was in the works.  That was last year, and a few days before the show, Bono had emergency back surgery in Munich.  So much for a private party in Rice Eccles Stadium with 50, 000 of my closest friends.  So we waited one year, sitting on the most expensive tickets ever, for the show of all shows, the U2 360 Tour

It was worth the wait.  My good friend Lya Wodraska, a U2 fan-for-life hooked us up with the inside scoop.  We waited in line for two days to get up close and personal.  Our two oldest boys got to have the time of their lives instead of going to school.  We figured there was plenty of learning going on here about life, love, people and rock stars with a lot of class and a passion for making the world a better place.

Just before they let us into the stadium, Lya caught a glimpse of their head of security walking to the south end of the building.  She grabbed me and we very casually followed him to the place where about 20 people were waiting for the band to arrive.  I can’t remember the last time I had butterflies like that, except for, oh yeah, whenever I look in my dear sweet Michael’s eyes of course.

The environmentally friendly SUVs pulled up, and out they came.  Bono and The Edge spent at least 10 minutes talking to each person in line, as if they had no other place in the world they had to be.  They were both so calm, so kind, so seemingly interested in what their fans had to say.

The night kept getting better, as Bono came to our spot on the rail and held up Michael’s LOVE Brand flag, which was seen on the jumbo screens for all to see.  Then, later during “Pride In The Name of Love” he grabbed another LOVE flag from the crowd and but it on his butt and strutted across the stage.  Unbelievable, and unforgettable.

These guys are still together and filling stadiums and making great music after 30 years.  They are family guys who have never gotten into the drug scene, no sex scandals.  Bono has a small goal in life through the ONE Campaign…no child born with HIV by 2015. I wonder if he needs a personal trainer/yoga teacher to help him keep that back healthy???